Looking at the number of math questions that feature animals and birds, not even man’s best friend comes close to the rabbit—the beloved pet of math writers and teachers.

Think of the Fibonacci numbers, published by Leonardo of Pisa in Liber Abaci ("Book of the Abacus" or "Book of Calculating") in 1202, in connection with the rabbit population:

If every month a pair of rabbits produces one new pair, which begins to bear young two months after its own birth, how many pairs of rabbits will there be after a year?

Show that at the end of the twelfth month, there will be a dozen dozen pairs from a single pair.

Singapore math wouldn’t quite stand out from other foreign math curriculums, without its unhealthy number of brain-unfriendly math questions on chickens and rabbits (and goats and sheep). Even the smarter and (arguably) cleaner pigs unfairly lose out vis-à-vis the rabbits, simply because it's politically or religiously incorrect to use "infidel" pets or mammals and "haram" items in Singapore math textbooks, which are primarily targeted at a multiracial and multicultural student population.

Through my dozen-odd supplementary Singapore math books, I'm guilty of contributing to the undue stress inflicted on millions of bunnies and their caring (or mathophobic?) owners around the globe. Below are two elementary math rabbit questions taken from my unpublished manuscripts:

A farmer has some chickens and rabbits.
There are 60 eyes and 100 legs altogether.
How many chickens and how many rabbits are there?

Challenge: Can you solve the above word problem, using a different method, say, the Stack Model Method, or the Sakamoto Method?

The next grade five or six question showcases two methods of solution, commonly used in Singapore local schools—students aren't expected to solve it by substitution or elimination methods, as these aren't formally taught in elementary school. 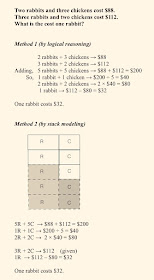 A few years ago, I produced the bunny meme pictured below and posted it on the Imgur app, together with the accompanying wicked question:

Farmer Yan has almost twice as many chickens as rabbits.
The total number of legs and heads is 184.
How many rabbits are there? 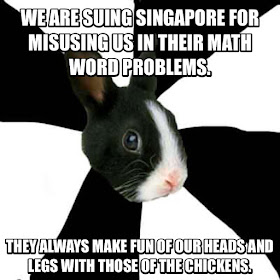 Now you know why these angry bunnies are "mathematically stressed," compared to the lazy, pampered cats and guinea pigs! Can you show why the answer is 17 rabbits? If as an elementary math student you could solve this, the odds that you might be born or blessed with the "mathematical gene" are pretty high.

In the wild, the rabbit is inarguably the most preyed-on animal in the world: from cobras, pythons, eagles, owls, lions, tigers, wolves, and hyenas, just to name a few common predators.

Guesstimate how many predators depend on the rabbits for their livelihoods every year. Or, how many rabbits have their lives cut short to feed their predators? Well, see these predators as playing their part in maintaining a healthy ecosystem for mankind—a proof that life isn't fair.

Recently, in the heat of the trade war between the US and China, as nationalistic mainland Chinese tried to promote their own brands of local products, I coined Rabbit Math and got it approved on Urban Dictionary, before some mean fellow probably with an axe to grind maniacally tried to continually downvote the phrase and had it taken down from cyberspace.

Beware of "digital terrorists" who just don't want to see even neutral mathematical terms or words floating on the internet—indeed, this sounds like the mathematical equivalent of Boko Haram. 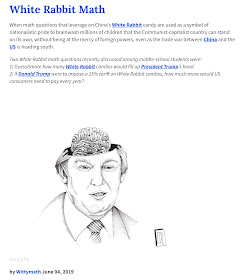 Go Forth and Multiply

Before 1788, there were zero rabbits in Australia. That year, rabbits arrived on a boat from England; by 1950, there were 600-odd million rabbits in the Land of the Kangaroos.

If humans had babies at the rate rabbits do, show that our global population would double every three weeks.

Early this year, I christened "5-Day Weekend" as a working template to promote creativity and productivity among time-poor workers, who always complain that their weekends are too short, and can't hardly get any productive work done on weekdays. 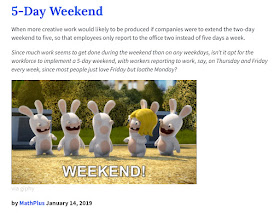 Let me end with some tidbits about the idiosyncrasies of our beloved bunnies.

Those of you, who are bunny lovers, please share with the rest of us your favorite numerical factoids or numeroids about these cute animals.

As Productive as Fibonacci

Amateur-mathematician Fibonacci was a math popularizer and writer, who promoted the Hindu numerals during his European travels, besides blessing the mathematical brethren with a number of interesting or story arithmetic problems, one of which is the "rabbit problem" for which he's dearly remembered today.

At a time when greying Singapore is historically experiencing its lowest fertility rate—which may lead the island-state to go the way of the dodo, if no disruptive measures are taken, other than conveniently (or simplistically?) depending on baby bonus incentives and immigration to arrest the population decline—for us, math educators, let's not stop being as mentally fertile and creative and productive as Dr. Fibonacci, although few of us would dare to promote the kind of productivity rate of his fertile bunnies!

A Trip to the Bunny Island https://www.greatbigstory.com/stories/the-mystery-of-rabbit-island/?xrs=CNNHP